Water hemlock, (Cicuta spp.) is a common name for four closely related, highly toxic plants in the carrot family. Other names for these include cowbane, suicide plant, and poison parsnip. These plants are found in damp places throughout temperate regions in North America, Asia and Europe and are considered to be some of the most deadly in the world.

They have smooth, branching, hollow stems with alternating feather-like leaves with many long, ovular leaflets with serrated edges. The stems often have red blotches or streaks and/or red nodes where the leaves meet the stem, but not always. The leaves veins terminate in the notches between the leaf tips. The veins in the leaves of other members of the carrot family terminate at the ends of the leaf tips.  The root is thick and tuberous, branching with many tubules containing an oily liquid that is yellowish in color and turns reddish-brown when exposed to oxygen. This liquid smells like parsnips. The entire plant may reach eight feet (2.5 meters) in height.  The umbrella-shaped flower heads consist of small white flowers similar to those you’d see in other members of the carrot family, such as the common wild carrot or Queen Anne’s lace.

Bulbous water hemlock Cicuta bulbifera L. forms tiny bulbs at the leaf joints in the upper part of the plant. The bulbils can grow into new plants. The plant does not generally grow taller than 3.5 feet (1.5 meters) tall. The stems are light green with perhaps a reddish tinge, smooth, and waxy. The flower heads are about 2-4 inches across and consist of 8 smaller flower heads with about 16 white flowers in each. Bulbous water hemlock is a perennial herb that is found in the Northern part on North America including all of Canada and the Northern half of the United States, though it has been seen further south.

Douglas water hemlock or Western water hemlock Cicuta douglasii is native to the Western part of North America. This water hemlock can reach 4 feet or two meters tall and has purplish spots along its characteristically hollow stem. It is one of the first plants to appear in the spring. 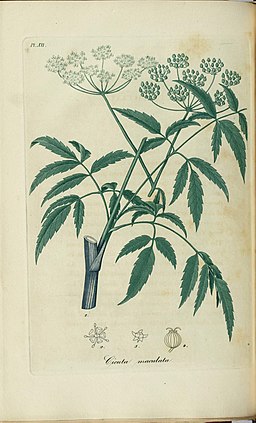 Spotted cowbane, spotted parsley, spotted water parsnip, suicide root Cicuta maculata L. This water hemlock can be found throughout most of North America. It reaches 4.5 feet tall or 1.5 meters tall. Its stem may be purple-striped or mottled.

Cicutoxin is a central nervous system stimulant that causes cell overactivity resulting in seizures. Other symptoms include drooling or foaming at the mouth, nausea, vomiting, dizziness, tremors, confusion, dilated pupils, and drowsiness. Further symptoms of the overstimulation of the central nervous system include abnormal heartbeat, changes in blood pressure alternating between high and low, hallucinations, delirium, tingling or numbness of the skin, and feelings of weakness. Coma and death can occur within 15 minutes to a few hours. There is no antidote to the poison, but recovery can take place with quick action including inducing vomiting and the use of activated charcoal to absorb the toxin, medication to suppress seizures and other supportive measures to manage symptoms until they have run their course. It may take days or months for a complete recovery and lingering symptoms of restlessness, twitching, weakness, anxiety and retrograde amnesia may occur.

Apparently, there are traditional treatments for migraine headaches, painful menstruation, worms, and dermatitis involving water hemlock. I have not found any science to back up its effectiveness in any case and considering that just a small amount can result in death in as little as 15 minutes, I suggest seeking other alternatives.

I do not recommend using water hemlock for magick. It does not have a rich lore history; most lore referencing hemlock is referencing poison hemlock, a not-so-distant and only-slightly-less-toxic cousin. Neither plant have any magical properties that I am aware of that can’t be gotten elsewhere. The energy of water hemlock seems to resonate best with Saturn.

Cicuta maculata American Hemlock chapter in American medical botany, being a collection of native medicinal plants of the United States, containing their botanical history and chemical analysis, and properties and uses in medicine, diet and the arts, with colored engravings Volume 1 by Bigleow, Jacob 1786-1879. In the Digital Library for the Decorative Arts and Material Culture, University of Wisconsin.

I have been practicing magick alone and with family and friends for over 30 years. As a founder and lead writer on Witchipedia, I’ve been publishing articles since 2006.

It is our mission to provide the most accurate Pagan, occult and magical information.

Join the Witchipedia Facebook group with hundreds of like-minded witches from all around the world.

Witchipedia was created in 2006 as an online encyclopedia of witchcraft, magick, and the occult to simplify the information available to practitioners worldwide.

Part of the Magickal Spot Family

This website uses cookies to improve your experience while you navigate through the website. Out of these cookies, the cookies that are categorized as necessary are stored on your browser as they are essential for the working of basic functionalities of the website. We also use third-party cookies that help us analyze and understand how you use this website. These cookies will be stored in your browser only with your consent. You also have the option to opt-out of these cookies. But opting out of some of these cookies may have an effect on your browsing experience.
Necessary Always Enabled
Necessary cookies are absolutely essential for the website to function properly. This category only includes cookies that ensures basic functionalities and security features of the website. These cookies do not store any personal information.
Non-necessary
Any cookies that may not be particularly necessary for the website to function and is used specifically to collect user personal data via analytics, ads, other embedded contents are termed as non-necessary cookies. It is mandatory to procure user consent prior to running these cookies on your website.
SAVE & ACCEPT

Except where otherwise noted, Witchipedia by Dawn Black is licensed under a Creative Commons Attribution-NonCommercial 4.0 International License.